History and stories of faience in Moustiers

Moustiers, a land of plenty for potters

Thanks to its abundant water, wood and clay resources, Moustiers was a land of plenty for potters before becoming the capital of faience in France from the late seventeenth to the early nineteenth century.

The first major potter in the village, Pierre Clérissy, started work around 1680, and he brought with him the secret of enamel ceramics. He created the Bérain design, inspired by the drawings of Jean Bérain, who was an artist at the court of Louis XIV. It is the latter that Moustiers has to thank for its amazing growth at the time: indeed, to finance his wars, the Sun King requisitioned all silverware in the kingdom, which had to be replaced by a refined tableware. Moustiers faience became a royal pleasure. 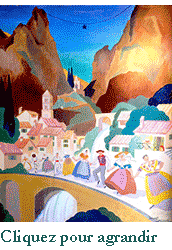 Other famous Moustiers faience makers include Joseph Olérys, who introduced polychromy in faience designs, Joseph Fouque and the Ferrat brothers, who specialized in the delicate technique of “petit feu”, a way of obtaining brilliant colors through low-temperature cooking (see glossary below).

Faience production declined after the French Revolution, as nobility no longer bought faience. The last kiln is extinguished in 1873. But in 1925, Marcel Joannon, better known as Marcel Provence, rekindled the faience fire in Moustiers and also started the Moustiers Academy and the Faience Museum. Others soon followed, among them the artist and faience maker Simone Garnier (see one of her paintings above), who inspired a new generation of Moustiers potters.

How about cleaning and care?

Taking proper care of faience is very simple, as it is not fragile: it can be used every day without ever losing its gloss and brilliance. Just follow these guidelines:

– Do not use abrasive scouring pads
– Prefer a soft cleaning brush
– But why bother? Our faience is dishwasher safe, even on a daily basis!
– Be cautious when drying precious pieces by hand!

It is indeed possible to make faience sing, as can be heard in this video, but only a master faience maker will make music that is not off key!

Faience is an art with its own language: here are some key words to help you decipher what the master faience maker is talking about!

Barbotine: white liquid clay used to glue together faience parts before cooking, for example a loop or a teapot spout.

Biscuit: state of faience after a first cooking at 1,020 degrees Celsius. The clay is then hardened but still porous, ochre in color. The biscuit is then plunged in a glaze bath.

Glazing: once the biscuit is cooked, it is plunged for a very short time in a glaze bath using special pincers: the porous biscuit absorbs the glaze instantly so the faience maker must move fast. At this point, the piece is ready to be decorated before its second cooking which will fix and vitrify the glaze. 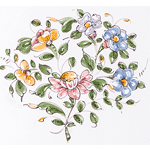 Solanée flower: typical design in the Moustiers tradition, consisting of symmetrical bouquets of three or four flowers around a central motif.

Grotesque: decoration introduced in Moustiers tradition by Joseph Olérys, inspired by various scenes and performers from the Commedia dell’Arte and by ornements from Italian restoration sites.

“Petit feu”: litteraly, small fire. A technique consisting in painting a decoration on cooked glaze, with a third firing at a lower temperature (around 750 degrees Celsius). It is a delicate process which delivers very bright colors.

Decorators sometimes use tracing paper, called a “poncif”. The lines of the drawing on the tracing paper are perforated by tiny holes. The tracing paper is then applied to the piece and lightly pounded with a pouch filled with carbon powder (which will burn during cooking), revealing an outline for the painter to follow.

This traditional technique goes back to the 18th century and should not be confused with industrial chromolithography.